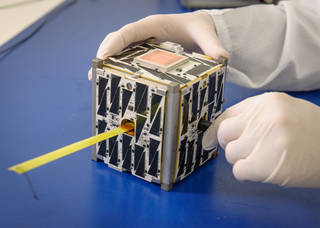 CubeSats are miniaturized satellites which comply with agreed to standards, including component cube dimensions of 10 cm on a side and less than 1.3 kg of weight per unit. Imagine a container with a liter of water — that is about the size and weight of a CubeSat.

Because they are so small and primarily use commercial off-the-shelf components (mostly designed for cell phones), CubeSats are fast and cheap to design and deploy. Historically they have been launched as secondary payloads with larger launches. Over 800 CubeSats have been deployed to date, and at least 1200 more are planned for orbit. A new industry of launch services targeting CubeSats (and other small satellites) is taking shape.

The simplicity and low costs of CubeSats means many groups can now become involved in space science. Universities, high schools, and individuals have all designed and launched CubeSats. Some have even been funded by KickStarter campaigns.

Developing countries are also involved. For example, Kenya recently designed the CubeSat 1KUNS-PF which was carried to the International Space Station by a SpaceX resupply mission, and from there launched into orbit. Over 18 months it will assist with mapping of Kenya, monitoring the coastline, and identification of illegal logging. To date, an impressive 80 countries have launched CubeSats.

So to summarize, 800 CubeSats have been launched by 80 countries, with 1200 more already scheduled to go!