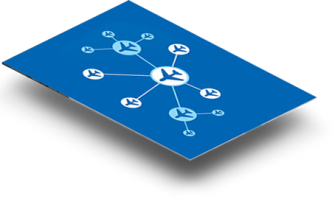 In the rush to expand broadband, companies are developing satellites, drones, balloons — and even outfitting LandCruisers.

One group, however, is taking a sensible-sounding approach utilizing a resource that is already airborne: commercial aircraft.  The Airborne Wireless Network proposes to outfit hundreds (eventually thousands) of aircraft with telecommunications equipment capable to communicating with both ground stations and other aircraft. The “mini-satellites” would form a mesh network serving worldwide data and communications service providers.

The firm has tested initial prototypes using two aircraft, and plans a 20 aircraft test in early 2018. The anticipated global rollout is scheduled for 2021.