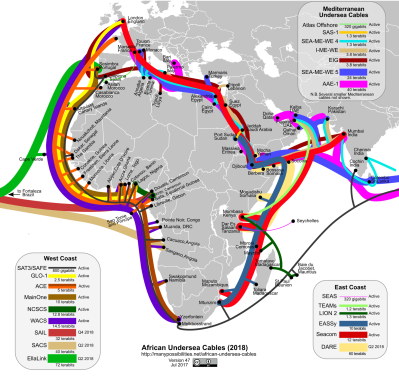 The internet relies almost completely on fiber optic cable for long distance transmission (the other alternative is satellite — which represents only about 1% of overseas traffic).

In the case of Africa, the first fiber optic connection to the continent technically arrived in 2000 with the SEA-ME-WE3 cable which stretches from Germany, through the Red Sea, to India, Southeast Asia, and Australia. It only connected to Egypt and Djibouti in Africa, however.

New cables not only introduce capacity, they also introduce redundancy. Undersea cables are periodically damaged unintentionally, such as the outage in Somalia last year due to a commercial shipping incident. With a new “web” of connections, outages will be less prolonged and severe.

Simultaneously, hundreds of projects are laying cable across the continent itself.

Liquid Telecom, operator of the largest fiber network across Africa, has laid over 50,000 km of cable. Other international companies are also involved. For example, in 2017 Google laid about 1000 km of fiber in Uganda, and is currently laying 1000 km more in Ghana. Facebook plans nearly 1000 km of fiber itself in Uganda.

With added capacity comes added competition — and lower prices. Nic Rudnick, the chief executive of Liquid Telecom, estimates that the price of moving a megabit of data from London to Lagos has dropped over several years from $600 to $2.

Fiber optic cable represents only part of the broadband solution in Africa — it will likely never reach most rural areas, for example. But in terms of providing a capable, expanding backbone to broadband services across the continent, fiber optic infrastructure is growing quickly.